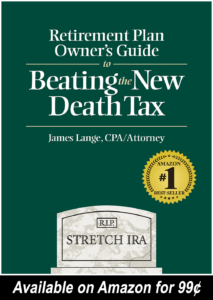 As I had mentioned in prior columns, I am extremely concerned about the impact the looming SECURE Act could have on retirement plan owners and their families.

This is of special concern to you if you have a large IRA that is likely to survive you. There are no proposed changes to the rules for spousal beneficiaries; however, the SECURE Act, subject to other exceptions, would force your non-spousal beneficiaries to pay income tax on the entire balance of your IRA within ten years of your death. Your Roth IRA will also have to be withdrawn within ten years of your death (though tax-free). If you do nothing in response, the SECURE Act could spell financial catastrophe for your family.

To that end, I wanted to provide you with a quick update on what has happened with this legislation since the 417-3 vote in the House of Representatives on May 23rd.

After receiving the SECURE Act fresh from its near-unanimous passage in the House, Senate leadership chose to “hotline” the bill. This strategic procedure is employed by leadership when they want to pass an overwhelmingly popular bill immediately, without debate or amendment, and it requires unanimous consent. The choice to use this process with the SECURE Act underscores the widespread bipartisan support the bill commands in both houses of Congress.

The caveat of this expedited process is that if even one Senator registers his or her “objection,” that places a “hold” on the bill, and it cannot move forward until he or she has removed that hold. Senator Ted Cruz (R-TX) and a few other Republican Senators have placed holds on the SECURE Act but for reasons having nothing to do with Inherited IRAs. They want the bill to include an additional provision that would allow Section 529 plan funds to be used to pay for home school expenses. These Senators have not yet removed their holds.

While the initial expectations of a summer passage of the SECURE Act now look overly bullish, there is still reason to expect the bill to pass the Senate after the August recess. Senate Majority Leader McConnell, a strong proponent of the bill, will be able to attach the bill’s text to one of the many spending bills that will need to be passed in September, meaning the SECURE Act has another avenue with which it can be passed―through a normal floor vote. Based on the bipartisan support that the bill saw in the House, there is a good reason to believe Senators on both sides of the aisle would support its inclusion in a spending bill come September.

Unfortunately, it still seems more likely than not that the SECURE Act makes it through the Senate this year. Even if the bill doesn’t pass this year, it is very likely to pass before you do. The sooner you learn about how the bill works and more importantly the steps you can take to protect your family, the better.

As Tom Hagen noted in The Godfather Part 1, Don Corleone always insisted on “hearing bad news immediately.” There is wisdom in that policy. Having this information now allows time to prepare, react and strategize.

If you would like to discuss the impact the proposed law would have on your personal situation, please feel free to call our offices at 412-521-2732 to see if you qualify for a free Retire Secure Initial Consultation.