How Seniors Can Get More Out of Their Charitable Donations

Most people who are over age 70 1/2 will have a traditional IRA and many will make some donations to charity.  If this describes you, you should be glad to know that the Qualified Charitable Distributions (QCD) rules are now permanent tax laws.  In prior years, the QCDs were not approved as tax law until the tax year was almost over, so making use of them was often difficult.  But as it has become part of the permanent tax law, we can safely plan to put them to use starting in 2016.

At age 70 1/2, you will have to take required minimum distributions (RMDs) from your traditional IRAs for the year in which you turn 70 ½ and beyond.  Using the QCDs for your donations means saving extra money is possible for many, if not most, people age 70 1/2 or older with IRAs.

Under the QCD rules, you can make charitable donations directly from your IRA rather than the normal procedure of taking a taxable distribution and then taking an itemized deduction for the donation.  When using QCDs you are not able to claim that contribution as a charitable donation on your itemized deductions.  People often think this will not make any difference in your taxes, and although in some cases it might not, in many cases, it creates significant savings.

The QCD rules require you to actually be 70 ½.  They cannot be used now if you don’t turn 70 1/2 until later in the year. Also, it only applies to distributions from IRAs, not from other retirement plans like your 401(k) or 403(b).

The basic result of using QCDs is that you have lower IRA income and thus lower adjusted gross income (AGI) shown on your tax return.

For people with basis in their IRAs using QCD’s will not use your basis on the amount donated to charity.

By using QCDs, you reduce the taxable amount of RMDs you would otherwise have to withdraw.  This provides many money saving advantages in various tax situations as discussed below.

SAVINGS WHEN THE STANDARD DEDUCTION IS USED

SAVINGS WHEN THE SOCIAL SECURITY IS NOT FULLY TAXABLE

The “Grand Slam Home Run” created by QCDs is for people using the standard deduction and whose Social Security income is not fully 85% taxable when after the QCDs are used.  The taxable amount of Social Security is based on how much other AGI you have on your tax return. So when you lower your AGI with QCDs, less of your Social Security is taxable.

Here is a simple example of the Grand Slam QCD. Suppose a single person over age 70 1/2 has 2015 income of only $30,000 from Social Security and $40,000 RMDs from traditional IRAs. This person donates $4,000 to charity but still has to take the standard deduction of $7,850 because there are not enough other itemized deductions.  The federal income tax would be $8,425 without using QCDs. By jumping through the IRS hoop to donate the $4,000 directly from the IRA account, the tax falls to $6,575 creating a tax savings of $1,850 – nearly half of the donated amount!  Helping to create this savings is the decrease in taxable Social Security income from $22,350 without using QCDs, to $18,950 with QCDs.

Nearly all people age 70 1/2 are on Medicare. The premiums for Part B and sometimes Part D are usually deducted from their Social Security payments. If your Modified AGI (MAGI, which includes tax-exempt interest) is over a certain amount, these Medicare premiums will be raised for one year in the future.

Higher income tax payers face a lot of additional taxes and losses of deductions when AGI rises. These include:

I have prepared an example of how QCDs can help someone who is subject to these taxes. I assumed there is a single person with AGI of $280,000 including investment income. There are itemized tax deductions and $20,000 of charitable donations, but I did not use any medical or miscellaneous itemized deductions. There are total taxes of $57,047 without using QCDs including income tax, AMT, and NII tax.  By using QCDs for the $20,000 of charitable donations, the total taxes are reduced to $56,296. This produces savings of $751.

QCDs can help in the Roth conversion planning process.  Some people want to make Roth conversions but only up to the point where their Medicare premiums will not increase based on MAGI. Since MAGI is reduced by using QCDs, that means more can be converted to Roth IRAs.

VARIOUS OTHER BENEFITS OF QCD’S

Without getting too much more involved in the tax code, there are many other ways QCDs can benefit you by reducing your AGI.  Certain deductions and credits are limited by higher AGI. A tax credit example is the Lifetime Learning Credit.  If you are taking some college courses later in life, you may be eligible for this credit if your income is under certain limits. Using QCDs may help you qualify for the credit.  A deduction example is the rental loss deduction that can become limited if your income is over $100,000. Using QCDs lowers your income and may allow a bigger rental loss deduction.

NO DOWNSIDE OR COSTS OF QCDs?

The minimal downsides of using QCDs are simply the procedures. There is no cost to using them.  You must only send your IRA investment manager or broker the name and address of the charity and how much to donate.  You will likely want to lower your other RMDs above the amount donated, so keep track of this.  You will still need to get the documentation letters from the charities like you would have to do on any other charitable donation. You will have to keep track of the QCDs and tell your tax preparer you made them. If you do your own return, you must follow the rules on how to present the QCDs on the 1040.

It may be a slight additional burden on the IRA broker to process a QCD distribution. Because of the additional paperwork, you may want to use QCDs only for the larger contribution amounts. You may even want to “bunch-up” your charitable donations for the year, or even for two years at a time, to take advantage of the standard deduction and other advantages mentioned above.

Because there are no significant disadvantages and no costs of using QCDs, you should use them to make your charitable donations if you are over 70 1/2. If it is early in the tax year, you may not even be aware of how they will save you money for the current year.

I know this is a lot of technical information, and it is a shame the IRS makes you “jump through hoops” for QCDs instead of just allowing you deduct all your charitable donations from IRA income.  But why not take a small jump and find out from your tax advisor if you would see any potential savings. It certainly makes sense if you were going to make the charitable donations anyway! 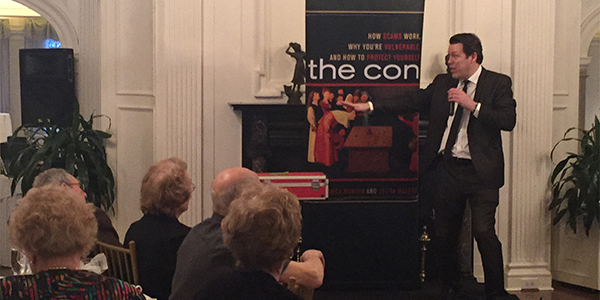 We had a wonderful dinner at the Pittsburgh Golf Club on May 3rd for all of our investment clients.

There was a delicious dinner, wines, and decadent desserts.  We all enjoyed an informative and entertaining presentation on fraud and identity theft.  Using humor, magic, and engaging our clients in real discussion, James Munton delivered an important message on the dangers of identity theft and showed us how to spot fraud before we fall victim to it.  I was even pulled up on stage for a magic trick, and the experience was… revealing… to say the least!

I am really looking forward to our fall event.  I hope to see many of you there!

In past columns I have written about the benefits of three supplements that I and many medical professionals think practically everyone should be taking:

I stand by that advice.  A new doctor of mine recommends one more that he thinks practically everyone should be taking – curcumin which is found in turmeric.  I have Indian clients that claim the incidence of Alzheimer’s in India is much lower than the U.S. and the attribute at least in part, to a regular diet including turmeric.  I recommend you do your own research, but consider the benefits of taking curcumin either as a spice by consuming turmeric or in a pill on a regular basis.