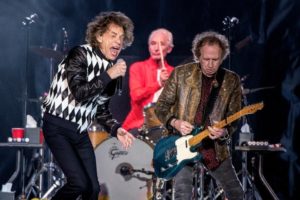 The Most Unlikely Insurance Salesmen: Meet The Rolling Stones

by James Lange, CPA/Attorney/Financial Advisor
Reprinted with permission from Forbes.com where Jim is a regular contributor
Photo credit: Rob Grabowski/Invision/AP

Sometimes it’s a hard thing to swallow when you realize that a personal icon has failed to maintain the standards you set for them.  Lance Armstrong, whose career I followed with admiration, conquered testicular cancer and went on to win the Tour de France seven times. He would go on to inspire hundreds of thousands, maybe millions of people with the Armstrong Foundation, now LiveStrong. But then he admitted that he took a variety of illegal performance-enhancing drugs to achieve his wins, even though for years he adamantly denied doing so and attacked anyone who said otherwise.

Barry Bonds, the skinny kid who looked like one of the most promising players the Pittsburgh Pirates ever had, went on to hit a record-breaking 73 home runs in 2001 and had a great career with the Giants. Even though his arms were as big as other people’s legs and he was hitting opposite-field home runs in his 40s, he denied using performance-enhancing drugs. Eventually, he was found guilty of obstruction of justice.

And now Mick Jagger, an icon of rebelliousness and the dramatic counterpoint to Paul McCartney—and, more recently, the recipient of a new heart valve—wants to sell you an annuity. All our favorite politicians are flawed at best. I don’t think that statement needs any elaboration. But Mick Jagger and The Rolling Stones selling insurance products? What is happening to the heroes of our youth?

As we age, our fear of running out of money or not having enough money to maintain our independent lifestyle often moves to the top of our list of concerns. Frequently, it is what keeps us up at 3:00 in the morning. Then, the polished Madison Avenue salesman assures us that with this guaranteed annuity investment, we will be okay, no matter what happens to the market. Don’t believe them. Don’t believe Mick Jagger.

I must hand it to their tour sponsor, The Alliance for Lifetime Income. The aging fan base for The Rolling Stones hits the perfect demographic for retirement worries. According to an article in the Washington Business Journal by Andy Medici, Give it up for The Rolling Stones! Also, does your retirement plan include annuities?, Alliance for Lifetime Income Communications Director, Cyrus Bamji, is quoted as saying “There is no better way to reach, in one fell swoop, 1.5 million Americans, most of whom are in our demographic, which are people who are just about planning for retirement or are in retirement.” The article goes on to say: “That means more than the typical signage and branding opportunities that come with a sponsorship, Bamji said, declining to say how much the group had paid. He stressed that the deal was cost-efficient, saying there will be plenty of interaction with fans. There will be a truck at each event with virtual reality experiences from The Rolling Stones’ production manager and jet car driver, Elaine Larsen — both have purchased annuities.”

I must be clear, the Alliance For Lifetime Income doesn’t endorse specific insurance products. They say their mission is to provide consumers with education, but according to their website, The Alliance “includes some of the nation’s leading financial service organizations.” Their status as a 501(c)6 organization means that they are permitted to do a wide range of lobbying on behalf of their members, without fear of losing their tax-exempt status.  So, let’s just say that you need to have your critical thinking cap on when you parse their recommendations.

The provisions in the SECURE Act that allow your employer to offer annuities in their retirement plan essentially provide insurance companies with access to your 401(k) plan. Understandably, the insurance companies are big fans of this legislation. I think it is a stinking pig wrapped in a pretty bow and can’t stand the way it is being packaged as a change that will benefit consumers.

Purchasing a traditional commercial annuity, which is the type Mick Jagger and The Rolling Stones and their sponsor The Alliance is trying to sell, is in my opinion rarely in the best interest of the consumer. Compared to other investment options, annuities have excessive costs and fees. And when the salesman makes a large up-front commission, sometimes 8% or higher, far less of your money really goes to work for you.

I won’t belabor the point, but which would you rather have working for you? $100,000 in a well-diversified portfolio of low-cost index funds or $92,000 (your $100,000 minus the commission) invested by a high-cost insurance company?  It was an easy decision for the esteemed Vanguard Group, which announced earlier this month that they are getting out of the annuity business and transitioning their existing accounts to Transamerica.

Personally, I don’t believe commercial annuities are in the best interest of most consumers. And it pains me to see the rebels of our youth being co-opted to sell them to you. Rebranding retirement in the image of The Rolling Stones? What’s next, Dylan rewriting the lyrics to Money Blues to include a pitch for annuities?

Be aware of who is trying to sell you what and always, always, always, ask them point-blank how much money they will be making if you buy whatever they are selling. You must watch your wallet and even then, you might not get any satisfaction.

Your IRAs and Retirement Plans are at Risk!
The House of Representatives Votes 417-3 to Approve the SECURE Act
A Brand New Bill that Will Give
The IRS the Power to Take Up To
1/3 of Your IRA and Retirement Plan
In Taxes After Your Death

9:30 – 11:30 AM
The Best Estate Plan for Married IRA Owners Combined with Optimal Trust Planning for IRAs and Retirement Plans.

3:15 – 4:00 PM
Solving the Investor’s Biggest Dilemma: How to Stop the Current Market Volatility from Threatening Your Long-Term Security.

To attend any or all of our 3 FREE retirement workshops, call 412-521-2732 or follow the link for how to reserve your seat here. 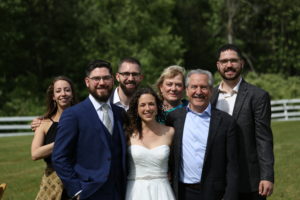 Bob Suter and Cindy Nelson, long-time clients, were thrilled when their son proposed to his girlfriend, but the topper was the wedding!  This past June, the joyous event was held in a beautiful repurposed barn in upstate NY—The Barn at Liberty Farm. In keeping with the wishes of the young couple, it was a collaborative affair (although, honestly, according to Cindy, they did most of the work). But one particular request took the groom’s mother by surprise. “Would she make the wedding cake—specifically would she make the family favorite spice cake with the brown-sugar icing?” A good cook, but NOT a baker, this presented a challenge, but who could say no? Apparently, you can learn a lot from YouTube videos! The end result was not your typical frothy white picture of elegance that comes to mind when you think “wedding cake.” But rather, more in keeping with the crazy requests her kids made for birthday cakes which often featured Lego pieces…“I want a cake that looks like a boom-box”… “I want a cake that looks like a skateboard.” In that spirit, she recreated the mountain-top/waterfall scene where the proposal took place. Quirky, with a sense of humor, a lot of butter and sugar, and a lot of love. 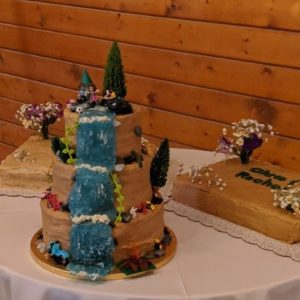 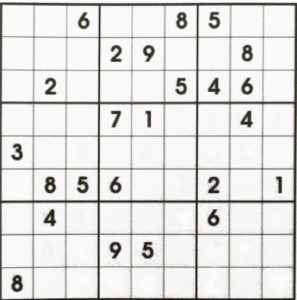 Kelp noodles are simple to prepare and low-glycemic.  Their neutral flavor makes them an easy, versatile addition to soups.

Combine the chicken stock, coconut milk and 1 ½ cups of water in a large stockpot. Add the onion, lemongrass, and chile and bring to a boil over medium-high heat. Reduce the heat to low and simmer until the onion is translucent, about 10 minutes.

Add the chicken and sugar snap peas and poach until the chicken is just cooked through about 5 minutes. Discard the lemongrass. Add the kelp noodles and bean sprouts and cook until the noodles are just soft, about 2 minutes. Stir in the salt.

Divide the soup among four serving bowls and top with the cilantro. Serve with lime wedges.