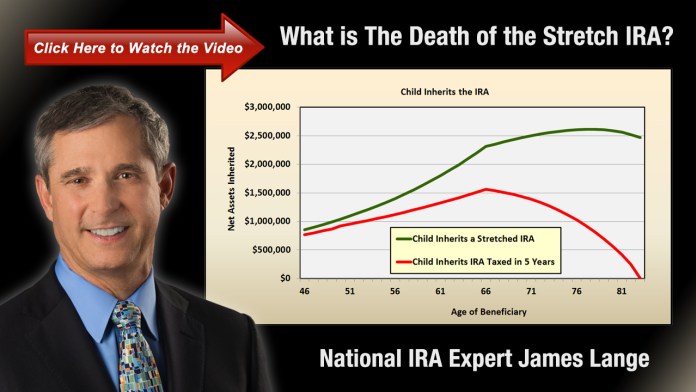 Now that the dust has settled from the election and President Trump has taken over the reins of the White House, voters are asking the question, “Just how does he plan to pay for his tax cuts?” At the risk of sounding like a broken record, I’m going to ask readers to refer to my latest book, The Ultimate Retirement and Estate Plan for Your Million-Dollar IRA. In that book, I warned readers about the legislation that proposed the Death of the Stretch IRA and offered solutions that you can implement to minimize its devastating effects.

Shortly after the book went to press, the Senate Finance Committee proved to me that I am on the right track. In September of 2016, in a stunning bipartisan show of support, they voted 26-0 to eliminate the stretch IRA. The Senate, however, adjourned for the year before they could vote on the Finance Committee’s proposal, so the legislation will have to be reintroduced on their 2017 legislative calendar.

What is a stretch IRA?

What is a stretch IRA, and why should you care if it goes by the wayside? The stretch IRA refers to the ability of your heirs to continue the tax-deferred status of your retirement plans long after your death. The current inherited IRA rules permit your beneficiaries to take very small minimum distributions over the course of their lifetimes, allowing more of their inheritance to remain in the protected tax-deferred account for a longer period. The new rules for inherited IRAs, on the other hand, will require that your children and grandchildren remove the money from the account within five years and pay income taxes on the withdrawals. Depending on the size of your IRA and other factors, these harsh new rules could throw your beneficiary into a higher tax bracket. Ultimately, they may even make the difference between your child being financially secure for the rest of their lives, and going broke.

I think that the election of President Trump will spell the end of the stretch IRA as we know it. The idea was introduced every year since as part of Obama’s budget but never had quite enough support to become law. Our new president wants to cut taxes for the majority of Americans and needs to find a way to pay for his plan. Since most people don’t think about taxes unless they’re associated with money they’ve earned themselves, eliminating the stretch IRA could be an easy way for the government to force billions in previously untaxed retirement accounts into their coffers. I believe that the Finance Committee’s proposal will reappear in 2017, but as part of a much larger tax reform bill – which is precisely what our new president has promised. In previous years, a bipartisan and unanimous recommendation by a Senate Committee would almost guarantee passage by Congress, but whether that still holds true after one of the most bitter and contentious elections in history remains to be seen. In any event, I will be offering a series of short video clips over the upcoming months that keep you up to date on the status of the legislation and provide insights as to what a change to the inherited IRA rules will mean to your beneficiaries. Remember, the key to smart planning is not trying to avoid estate tax, but income tax.