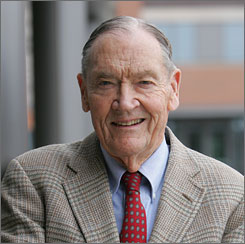 Encore presentations air on KQV EVERY SUNDAY at 9:00 a.m.

The three legs of America’s retirement system are shaky, neither structurally efficient nor fiscally stable. That’s what the U.S. Senate Finance Committee heard on September 16, during testimony by a man Fortune Magazine labeled one of four giants of American Finance: John C. Bogle, founder and now retired CEO of the Vanguard Group, the world’s largest mutual fund company, with more than 3 trillion dollars under management.

To hear why Mr. Bogle believes the situation is so precarious, tune in tomorrow evening at 7:05, as The Lange Money Hour welcomes him back to the show.

Over the course of his 63-year career, Mr. Bogle has changed the face of investing. A pioneer in the concept of index mutual funds, collective portfolios of stocks that mimic the movement of a defined market sector rather than a selection of individual companies, he is credited with creating the first index fund available to individual investors, the Vanguard 500.

Mr. Bogle has written a dozen books, including his 1994 bestseller Bogle on Mutual Funds to most recently The Clash of the Cultures: Investment vs. Speculation. At 85, he remains an active industry observer, appearing regularly on national financial media outlets. He recently described the personal mission he has set for himself in his retirement – “to speak out for truth and integrity and character in the world of finance, striving to build a better world for investors—honest-to-God, down-to-earth human beings who deserve a fair shake.”

You can watch his 6-minute Congressional testimony here:

We’re honored to have Mr. Bogle back as a guest on The Lange Money Hour. Please plan to join us Wednesday, Oct. 1, 2014 at 7:05 on KQV 1410 for an interesting and informative hour. The program will also stream live at www.kqv.com.

If you can’t tune in October 1, 2104, KQV will rebroadcast the show at 9:00 a.m. this Sunday. You can also access the audio archive of past programs including written transcripts on the Lange Financial Group website, www.paytaxeslater.com. Click on RADIO.

Finally, mark your calendar for Wednesday, October 15th at 7:05 p.m., when Pittsburgh City Controller Michael Lamb will join us for the next new edition of The Lange Money Hour.