What Are The Risk of Roth IRA ReCharacterizations? 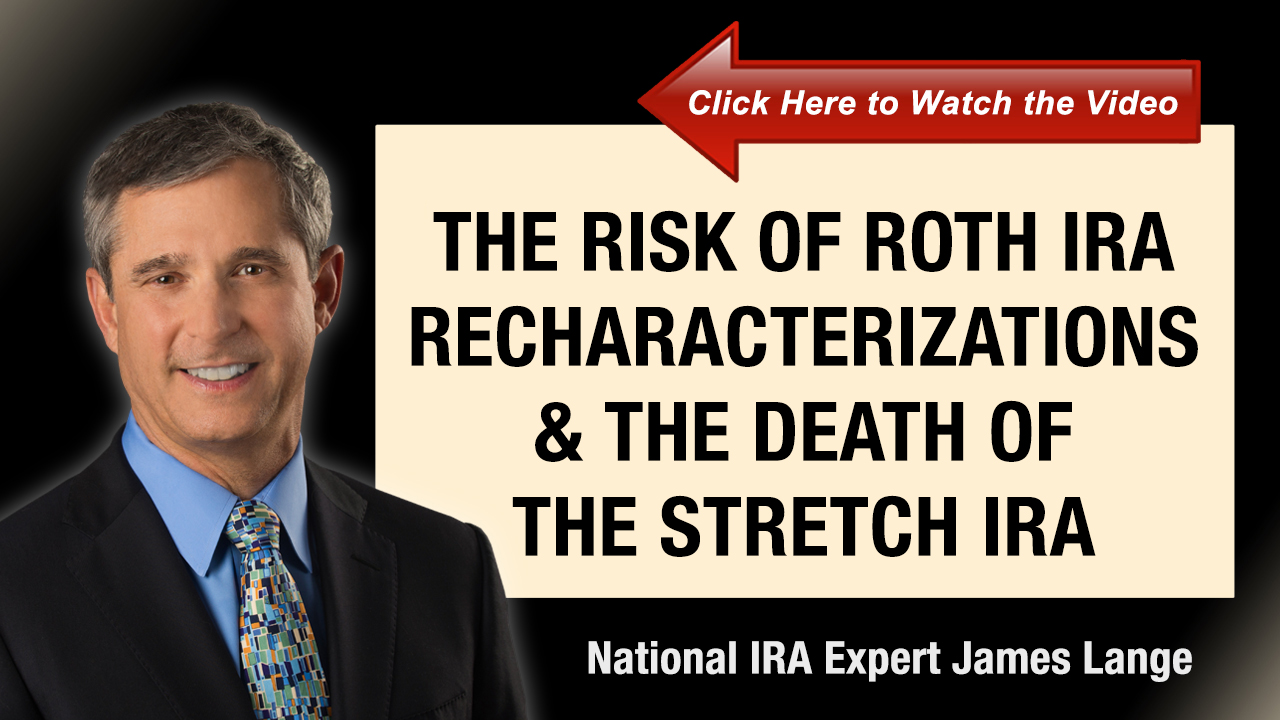 This post is the last in a series about how you might be able to use Roth IRA conversions as a defense against the Death of the Stretch IRA.

How does a Roth IRA Conversion Work?

Suppose you have an IRA worth exactly $1 million, and that it happens to be invested equally in ten different mutual funds of $100,000 each. Then suppose we run the numbers for you and figure out that $100,000 is the optimal amount for you to convert to a Roth IRA.  How does a Roth IRA Conversion work?

Well, one idea would be to start by ranking your funds according to how much you expect them to fluctuate in value.  Maybe you are holding a portion of your IRA in Certificates of Deposit at your bank.  Most people would expect that money to be “safer” because it generally doesn’t fluctuate in value.  Then suppose you have a portion of your IRA invested in large cap stocks.  You’ve noticed the value changing as the stock market moves up and down but, in your case, we’ll say this fund fluctuates an “average” amount compared to your other holdings.  Then suppose that you also a portion of your IRA invested in small cap stocks, and that fund has been known to lose 20 percent of its value overnight.  We’ll call that one the “riskiest.”

You can certainly convert your CDs but, in my opinion, going through all that paperwork to avoid paying taxes on the one or two percent you’ve probably earned on them doesn’t seem worth the time or trouble.  What about converting a little bit from each fund you own?  I’d prefer that to converting the CDs, but it still seems like more work than necessary.  What about your “riskiest” fund – the one that has the value that fluctuates wildly?  Let’s assume that you converted $100,000 of that fund.  What position might you be in a year down the road?

Remember, as long as you act by the October tax deadline, you can recharacterize, or undo, your conversion.  This flexibility can give you enormous peace of mind while you’re waiting for the details of the Death of the Stretch IRA to be finalized. A recharacterization will NOT get back the money your investment may have lost – you will need to wait for the market to come back up for that.  What the recharacterization can do is get back the money you paid in income taxes, if the account goes down in value.

A Risk of Roth IRA Conversions

As beneficial as Roth IRA conversions and recharacterizations can be, there is always one risk I make clients aware of when discussing them.  It has to do with the IRS itself.  Have you ever known anyone who has gotten tied up in an endless and stupid loop of government red tape?  Let me tell you about a married couple I know, who have always filed jointly.  The wife, whose name has always been listed second on the tax return, started a consulting business and, as she was required to, made an estimated tax payment for the income she earned.  The couple filed a joint return and waited for their refund to arrive.  They finally received a letter from the IRS and opened it, only to find that there was no refund enclosed.  Worse yet, there was a letter saying that no refund would be coming because they had overstated the amount of tax they had paid – a transgression that not only caused the IRS to completely wipe out their refund but add a significant amount of penalties and interest to their tax bill.

Armed with copies of canceled checks, the wife went down to the local IRS office and demanded they retract their letter – which they eventually did.  But do you want to know why it happened in the first place?   When the wife made the estimated tax payment for her business, she paid it using her own Social Security number because that was the number shown on the 1099s she’d received for her consulting work.  Unfortunately, when they received her check, the IRS didn’t recognize her as a taxpayer.  Even though she’s always filed jointly with her husband, her name and Social Security number were listed on the second line of the return, not the first.  And because hers was not the first name – even though it was a joint tax return – the IRS could find no record of her, and her tax payment just went into a big black hole!

Unfortunately, we have found that the IRS sometimes has trouble putting two and two together.  If both your conversion and recharacterization forms aren’t filled out exactly right, you could risk getting a nasty letter in your mailbox.  We fight those battles with the IRS on behalf of our clients, but if you’re a do-it-yourselfer, you need to know that it’s not unheard of for them to have a record of just one form or the other – but not both.  If it happens to you, you need to stick to your guns and get it sorted out.  A Roth IRA conversion can be your best defense against the Death of the Stretch IRA, and you can change your mind as long as you recharacterize by the deadline!

Thanks for reading, and stop back soon!